Elections allow voters to select their political leaders and hold them accountable for their performance in office. Requiring leaders to submit to regular elections is an essential element of democracy. Elections thus involve direct participation of citizens and make the government more responsive to the needs of the people. They also serve as a means to legitimise the acts of those who wield power by giving their policies a stamp of public approval.

Elections are held in India to elect members of the Lok Sabha, Rajya Sabha, Vidhan Sabhas (State Legislative Assemblies), and Vidhan Parishads (State Legislative Councils) as well as the President and the Vice-President of India. The elections are also conducted for local bodies such as Panchayats, Municipal Corporations, and Municipalities. Although, it must be remembered that not all elections are direct elections that involve voting by the citizens. Certain elections involve voting by elected representatives of the people and are thus referred to as ‘indirect elections.

Let us learn more about elections through this activity!

Step 1- A short video on elections can be shown by the teacher. The video link is given below:

Step 2- In the next step, please ask some probing questions based on the video played. Some of these questions could be:

Step 3- Explain the activity given below to the class:

Assign responsibility to 2-3 students/a group to make ballot papers for each office bearer nomination as per the class size by either taking printouts or making them manually using paper and pen.

Ask each student to prepare/print a ‘Voter Registration Card’ using a small piece of paper. To register to vote, each child should fill out a mock voter registration card on which they write their name, classroom, grade, and any other information you would like them to add. This process lets the students know that adults have to register officially long before they can vote on Election Day. 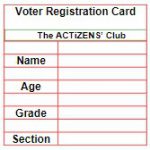 The teacher will collect all the Voter Registration Cards and make a voters’ list. Make sure to leave space after each student's name for their signature before they are given a ballot. Let the students know that this process ensures that people can vote only once in a single election cycle.
A sample is given below:

A group of students can make the ballot box using a shoe box or cardboard box with a small slit on the top. If they like, they can cover it with coloured paper and label it as "BALLOT BOX - ACTiZENS’ CLUB”.

Step 5- Start the voting process with a secret ballot.

Step 6- Count and tally the votes, and

Step 4- Set up a Ballot box

Set up a ballot box in one corner of the classroom and distribute ballot papers to all the club members (students).

Have the students vote by secret ballot, one student at a time.
Each student needs to find her name on the voters' list and sign next to it. That student then gets a ballot to cast a vote.

Have a private area in which the students can secretly read and fill out the ballot. A few desks in a corner will do. For an effect, you could also make a voter's booth in which a student can fill out the ballot more privately —a cardboard box used for packaging a refrigerator could work as a booth. Remind students that it is a secret ballot and that they are allowed to vote for whichever candidate they like — no one should pressure anyone to vote (or not vote) in any particular way! When the students are done filling out their forms, they can put their ballot in the Ballot box.

A sample of the result sheet is given below:

Step 6- Count the Votes and Tally them

As you count each ballot, tally the votes on the board (for students in higher grades, you can also calculate percentages of votes). When you are done counting, make sure the number of ballots is equal to the number of students. The candidate with the greatest number of votes shall be declared the winner. If there is a tie, you can have another round of voting, or the teacher can cast his/her vote.

To demonstrate to the students, the importance and impact of voting, make sure the election results go into effect when you said they would. Announce the winners and office bearers of The ACTiZENS’ Club and launch the Club officially by handing over the badges to the newly elected members and office bearers in a ceremony.

Ask students to fill up the reflection sheet. 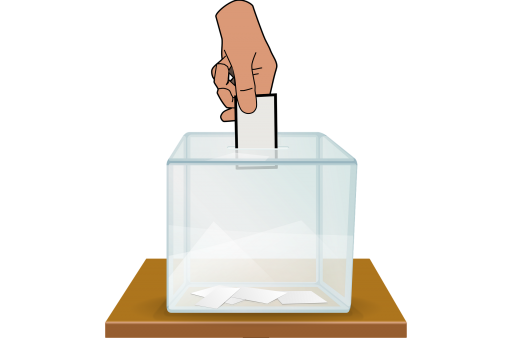